NAIP provides US-wide, high-resolution aerial imagery. This program is administered by the Aerial Field Photography Office (AFPO) within the US Department of Agriculture (USDA). Data are available from 2010 to the present.

Data are stored in cloud-optimized GeoTIFF files in Azure Blob Storage in the West Europe Azure region, in the following blob container:

Within that container, data are organized according to:

More details on these fields:

The filename component of the path (m_3008601_ne_16_1_20150804 in this example) is preserved from USDA’s original archive to allow consistent referencing across different copies of NAIP. Minor variation in file naming exists, but filenames are generally formatted as:

…for example, the above file is in USGS quadrangle 30086, in the NE quarter-quad, which is in UTM zone 16, with 1m resolution, and was captured on 8/4/2014. In some cases, an additional date may be appended to the filename; in these cases, the first date represents the capture date, and the second date represents the date at which a subsequent version of the image was released to allow for a correction. For example:

…was captured on 9/3/2018, and re-released on 2/10/2019. If you’re reading this because you want to digest this filename, the first date is almost definitely what you’re interested in.

Files are stored as cloud-optimized GeoTIFF images, with a .tif extension. These files were produced (from the original, USDA-provided format) and organized by Esri.

Small thumbnails are also available for each image; substitute “.tif” with “.200.jpg” to retrieve the thumbnail. For example, a thumbnail rendering of the image used in the naming convention example above is available at:

A complete Python example of accessing and plotting a NAIP image is available in the notebook provided under “data access”.

Mounting instructions for Linux are here.

NAIP data can consume hundreds of terabytes, so large-scale processing is best performed in the West Europe Azure data center, where the images are stored. If you are using NAIP data for environmental science applications, consider applying for an AI for Earth grant to support your compute requirements.

A copy of NAIP is also available in the East US Azure region, and will be maintained there until at least the end of 2021, but we encourage users to migrate to the West Europe copy. The East US data is in the following container:

The entire NAIP catalog is also available in a public instance of Esri Image Server. The Image Server base URL is:

An interactive map pulling from this Image Server is available here.

A list of all NAIP files is available here, as a zipped .csv file:

We also maintain an rtree object to facilitate spatial queries for Python users; see the sample notebook for details.

Data can also be browsed here.

Where did the .mrf files go?

In June of 2020, we updated our entire NAIP archive to improve both coverage and maintainability. We also switched from .mrf format to cloud-optimized GeoTIFF, and made some changes to path structures. The .mrf files are temporarily still available in another container; if they are important to your work and you need access, contact aiforearthdatasets@microsoft.com. 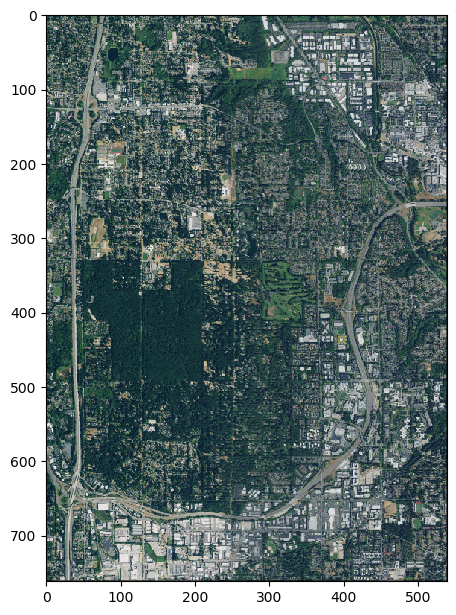 1m-resolution imagery of the area near Microsoft’s Redmond Campus in 2017.

MICROSOFT PROVIDES AZURE OPEN DATASETS ON AN “AS IS” BASIS. MICROSOFT MAKES NO WARRANTIES, EXPRESS OR IMPLIED, GUARANTEES OR CONDITIONS WITH RESPECT TO YOUR USE OF THE DATASETS. TO THE EXTENT PERMITTED UNDER YOUR LOCAL LAW, MICROSOFT DISCLAIMS ALL LIABILITY FOR ANY DAMAGES OR LOSSES, INCLUDING DIRECT, CONSEQUENTIAL, SPECIAL, INDIRECT, INCIDENTAL OR PUNITIVE, RESULTING FROM YOUR USE OF THE DATASETS.

This dataset is provided under the original terms that Microsoft received source data. The dataset may include data sourced from Microsoft.

This notebook provides an example of accessing NAIP data from blob storage on Azure, displaying an image using the rasterio library.

NAIP data are stored in the West Europe Azure region, so this notebook will run most efficiently on Azure compute located in West Europe. We recommend that substantial computation depending on NAIP data also be situated in West Europe. You don't want to download hundreds of terabytes to your laptop! If you are using NAIP data for environmental science applications, consider applying for an AI for Earth grant to support your compute requirements.

Access and plot a NAIP tile by constructing a path